Boulware, an interior lineman, will graduate from Tennessee over the summer and have two years of eligibility since he redshirted during his first season in Knoxville. He played both guard positions and “a little bit” of center during his time as a Volunteer.

“Mark Richt recruited me out of high school to UGA and when the opportunity presented itself again to be coached by him and I evaluated the situation, Miami had a hell of a run this season. There’s a couple spots opening up on the offensive line so there’s an opportunity for me to come in and contribute to the team immediately,” he said.

Boulware says he visited Miami in December and has been in contact with OL coach Stacy Searels since then.

“I met him when I got down there and we’ve been talking and building a good relationship ever since then,” Boulware said. “That was my first time ever going down there and it was very nice.”

The 6-4, 300-pounder says he will be going back-and-forth between Knoxville and back home in Atlanta to prep for his arrival to Coral Gables. He plans on working out with his trainer in Atlanta and staying in shape while finishing up school.

“I’ve got a lot of things in place to be ready when I get down there,” he added. 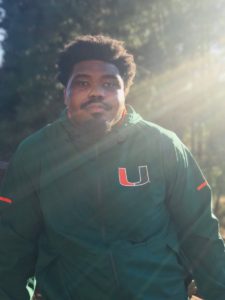 Breaking: Tennessee OL Transferring to Miami
The Hurricanes are adding a lineman that will be able to play right away.
Andrew Ivins

Miami is adding a graduate transfer on the offensive line.

InsideTheU has learned that Venzell Boulware plans to enroll at Miami this summer after he graduates from Tennessee in May. The redshirt sophomore started three games at right guard for the Volunteers two seasons ago before electing to leave the program. He will have two years to play two in Coral Gables.

Boulware is a former Top400 recruit out of Creekside in Georgia who picked the Volunteers over Ohio State. He was also recruited by Mark Richt and the Bulldogs.

50 VENZELL BOULWARE
POSITION OL
HT./WT. 6-3 / 306
CLASS Redshirt Sophomore
HOMETOWN Union City, Ga.
HIGH SCHOOL Creekside
2017 – REDSHIRT SOPHOMORE
Played in season-opening win over Georgia Tech in Chick-fil-A Kickoff Game (9/4)
2016 – REDSHIRT FRESHMAN
Games/Starts: 7/3
Made third start of career at Vanderbilt (11/26), starting at RG as Tennessee rolled to 516 yards of total offense
Started at right guard for the first time in his career against Missouri (11/19), paving the way for 609 yards of offense and as season-high 386 rushing yards
Saw action off the bench at guard against Tennessee Tech (11/5)
Made first start of career at left guard against Alabama (10/15)
Entered off the bench late in the second half at Texas A&M (10/8) to play left guard
Made second appearance of career off the bench vs. Florida (9/24)
Entered off the bench in win over Virginia Tech (9/10)
2015 – FRESHMAN
True freshman backing up at right guard, did not play in any games in 2015
Had his black stripe removed on Aug. 25
HIGH SCHOOL
Lettered at Creekside High School in Fairburn, Ga. for coach Olten Downs
247 Sports: 3-star (No. 37 offensive tackle, No. 36 prospect in Georgia)
ESPN: 4-star (No. 29 offensive tackle, No. 31 prospect in Georgia)
Rivals: 4-star (No. 11 offensive guard, No. 15 prospect in Georgia)
Scout: 3-star (No. 42 offensive guard, No. 4 offensive guard in Georgia)
Member of ESPN 300
Helped Seminoles to a 9-3 record his senior season
High school teammates with fellow Vols Elliott and Evan Berry
PERSONAL
Full Name: Venzell Vincent Edward Boulware
Born: Aug. 23, 1997
Son of Amanda Manigault
Majoring in Communication Studies
Recipient of Charlotte Greene Athletic Scholarship