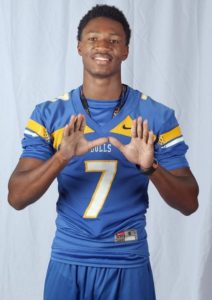 One day after the University of Miami announced that starting cornerback Malek Young would undergo “career-ending surgery,’’ Miami Northwestern High School cornerback Nigel Bethel posted on social media that he was committing to the Hurricanes’ Class of 2018.

Bethel, a local speedster and three-star prospect who was offered scholarships from several major programs that included Florida and Georgia, said Monday night with a graphic of himself with the U on Twitter that “NIGEL BETHEL” is “Committed.”

“As far back as I can remember blessings is all I’ve received,’’ he wrote. “But by far the biggest blessing I’ve received is being able to spend the next 4 years at home and further my Academic/Football Career at The University of Miami and officially shut down my recruitment. #Storm18. #CaneGang.’’

Bethel, listed as 6-0 and 165 pounds, got his initial offer from Miami on June 6, CaneSport.com reported, “but then the Canes were in and out of touch with him’’ and “got back hot on his trail in December, when he set an official visit for this coming weekend.”

Bethel’s addition is a valuable one, as the loss of Young, who was only a sophomore this past season, hurts. The Canes already had lost graduated senior Dee Delaney, which left them with soon-to-be senior Michael Jackson, upcoming sophomore Trajan Bandy and senior-to-be Jhavonte Dean.

Richt sent out a tweet shortly after Bethel announced his commitment: “It’s a great day to be a super fast, multi talented, exceptionally smart Hurricane. U Family!”

Safeties coach Ephraim Banda, who helped recruit Bethel, tweeted this: “THE BEST DADE is how we are going to be made!! #Storm 18.”

Bethel, who also played wide receiver for Northwestern, ran the 100-meter dash in 10.8 seconds this past track season, according to InsidetheU.com. He won a state title for the Bulls in the 1600-meter relay.