Donald John Bosseler (born January 24, 1936) is a former American football fullback who played in the National Football League for the Washington Redskins from 1957 to 1964. He played college football at the University of Miami and was drafted in the first round (ninth overall) of the 1957 NFL Draft. He was inducted into the College Football Hall of Fame in 1990.

College career
Bosseler was a four-year starter at fullback for the University of Miami. In his senior year, 1956, he helped the team to an 8-1-1 record, was named All-America by the Associated Press, and was MVP in the Senior Bowl. He rushed for 1,642 yards in his four years.

Don Bosseler was inducted into the University of Miami Sports Hall of Fame in 1970.

Don Bosseler was a four-year starter at fullback for the University of Miami. In his senior year, 1956, he helped the team to an 8-1-1 record, was named All-America by the Associated Press, and was MVP in the Senior Bowl. Miami placed sixth nationally, its highest ranking until the 1983 national championship season. Bosseler was recruited out of Batavia, New York, by Andy Gustafson and he joined Gustafson, his old coach, in the College Football Hall of Fame in 1990. “Being chosen for the Hall of Fame is meaningful,” he said. “It is the epitome of going to college and playing the game. I am highly honored.” He rushed for 1,642 yards in his four years. Then came seven years with the Washington Redskins. After his football days, he joined Prudential Bache in Miami and became a vice-president.

If you grew up in the mid to late 1950s, you probably remember the music of Elvis Presley blaring out of the jukebox at the local soda shop or James Dean lighting up the silver screen and Dwight Eisenhower in the White House. But if you were a University of Miami football fan, chances are Don Bosseler was your hero. If Norman Rockwell had to paint a picture of a football player, it would be Bosseler. At 6’1 and 212 pounds, he was big, muscular and sported a blond crewcut. His nickname was “Bull” and as a fullback, he preferred to run over tacklers rather than go around them.

Like many Hurricane football players at the time, Bosseler was from the Northeast part of the country (Batavia, NY). While there was good high school football played in South Florida, UM head coach Andy Gustafson preferred recruiting players from Pennsylvania, New York and New Jersey because the depth of football talent in the Sunshine State wasn’t as deep as it is today. From 1953 to 1956, Bosseler was the face of Miami Hurricane football. Before he arrived in Coral Gables, UM had never been ranked in the Associated Press top 10. Bosseler often played his best games against instate rivals Florida and Florida State. When his college career was finished, the Canes were a perfect 7-0 against the Gators and Noles.

During his senior year in 1956, Bosseler set a then UM record with 723 yards rushing on 161 carries and 4 touchdowns. On defense he was also Miami’s leading tackler from his linebacker position. The Canes finished the 1956 season ranked 6th in the nation by the Associated Press, marking the first time UM had ever finished in the top 10. Bosseler was chosen first-team All American by the Associated Press and was selected to play in the Senior Bowl where he was named the game’s MVP.

Bosseler’s football career continued when he was drafted in the first round by the Washington Redskins in 1957. He was the 9th overall pick and the third running back taken in a star-studded draft behind future hall of famers Jim Brown and Paul Hornung. He played all 8 of his NFL seasons with the Redskins and was named to the Pro Bowl in 1959. He finished his career in 1964 with 3,112 career yards rushing and 23 touchdowns.

In 1990 Bosseler was inducted into the College Football Hall of Fame. He is also a member of the University of Miami’s Sports Hall of Fame and his name is included in the school’s Ring of Honor. 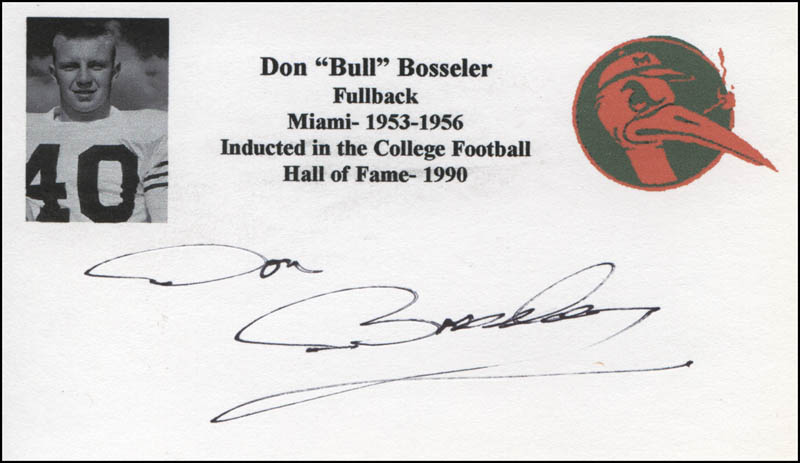 Don Bosseler
Fullback (1953-56)
Don Bossler finished his career with 1,642 rushing yards, which at the time ranked second all-time. Bosseler was an All-American and a first-round draft pick of the Washington Redskins. In 1990 he was inducted into the National Football Foundation Hall of Fame.

“I am elated to be honored with such great players, like Ottis Anderson, Bernie Kosar, and Burgess Owens,” Bosseler said. “It’s the highest honor that the University of Miami Athletic Department can bestow on their football players and I am proud to be one of the four inducted this year and one of the eight players inducted overall.”

Professional career
Bosseler was drafted ninth overall in the 1957 NFL Draft and played for seven seasons with the Redskins before retiring. He was a one-time Pro Bowler in 1959.

After football
After his football days, Bosseler joined Prudential Bache in Miami and became a vice-president.

The Washington Redskins will mark their 80th anniversary Sunday by revealing their 80 greatest all-time players, and one of those honored also will have played a significant role in University of Miami making a national name for itself.

Don Bosseler, now 76, starred at UM in the mid-1950s, back when the Canes were the biggest game in town, closer to the only game in town. Back then, if you said “the Dolphins,” folks thought you must have been talking about an attraction at the newly opened Miami Seaquarium.

This was three decades before the Canes’ first national championship. This was before stars such as George Mira and Ted Hendricks came along.

A prospect ahead of his time, Don Bosseler himself, per Greg Cote of the Miami Herald, can recall how different the game of football was “back in the day”.

“I played at 200 pounds,” Bosseler said in an interview, “and I think I was larger than both my guards. Sometimes, they’d be pulling and I’d have to yell, ‘Hey, not so fast!’ ”

The game of football has changed since the days of Bosseler. But even in the modern era, Bosseler would be a bruiser. Standing at 6-foot-1, 212 pounds, nicknamed “the Bull”, Bosseler was a standout for the Miami Hurricanes.

For his exploits, the Bull was drafted No. 9 overall by the Redskins, and in the NFL, he kept on charging. Bosseler would play running back for the Redskins for eight years, logging 3,112 rushing yards and 22 rushing touchdowns over that time, while receiving over 1,000 more yards.

Bosseler made the Pro Bowl once, in 1959. By the end of his career in 1964, he was Washington’s all-time leading rusher. The team never won more than six games in a season during Bosseler’s tenure. But “the Bull” kept them in every game.

In an era long gone, Bosseler stood out among the crowd as a man born to play football. Now, at 82 years old, he’s honored as one of the 80 greatest Redskins in history. It’s an honor that’s well-deserved.