God has the best plan, even when we don’t understand His ways or His timing. You are a great warrior and a true Cane…and there can only be one first…you’ll always be the 1️⃣st to rock the chain! ⛓?_?⛓ pic.twitter.com/fJDLCuXbjT

Since their season ended last month, the Hurricanes have had to deal with the losses of multiple members of their defense, some players opting to transfer out of the program, while others have declared for the NFL draft.

It appears Miami’s defense has been dealt another blow, this one with potentially serious implications for one of its top cornerbacks.

Malek Young, who was hurt in Miami’s 34-24 loss to Wisconsin in the Orange Bowl, has reportedly suffered a potentially career-ending injury according to the website CanesInsight.com, which described Young’s issue as a “neck/vertebrae injury.” The report continued to say, “It appears as though his football career is over.”

As of late Saturday night, Miami had not commented on the report, but several Hurricanes took to social media offering support for Young, including Miami defensive coordinator Manny Diaz.

Shortly after Young posted a picture of himself on both Twitter and Instagram with the message “God has [a] better plan,” Diaz responded with to Young with a message of his own.

“God has the best plan, even when we don’t understand His ways or His timing,” Diaz wrote on Twitter. “You are a great warrior and a true Cane…and there can only be one first…you’ll always be the first to rock the chain!”

Young, a rising junior out of Coconut Creek High, became a viral sensation early this season when he became the first Hurricane to wear Miami’s famed Turnover Chain after recording an interception in the Hurricanes’ season opener against Bethune-Cookman.

Young went on to play in all 13 of Miami’s games this season, starting 10. He finished with 43 tackles, two interceptions and he broke up a team-high eight passes. 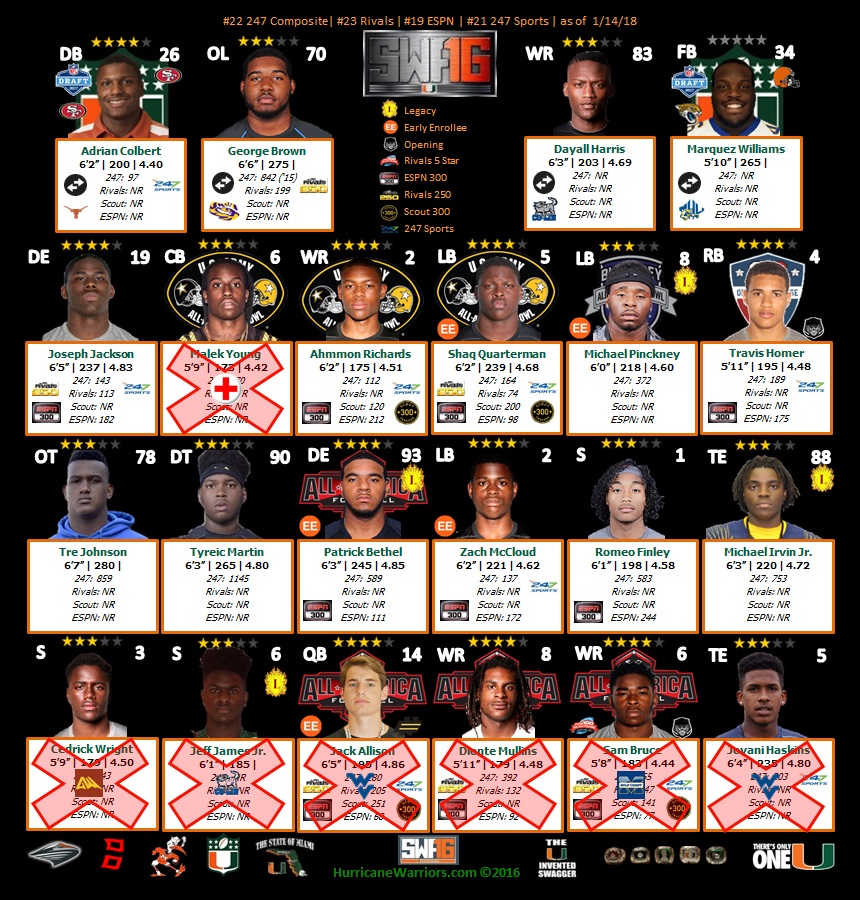 2017 (Sophomore): Saw action in all 13 games and made 10 starts…Earned All-ACC Honorable Mention recognition…Was among Miami’s top contributors in secondary…Had 43 total tackles and 3.0 tackles for loss…Finished with two interceptions and led team with eight pass breakups…Recorded second interception of career in season opener against Bethune-Cookman (Sept. 2)…Returned pick 24 yards…Added 1.0 TFL (five yards) vs. Wildcats…Set career mark with seven tackles (five solo) in win over Toledo (Sept. 23)…Added 1.5 TFLs (four yards) and had one PBU vs. Rockets…Made first start of season in win at Duke (Sept. 29), finishing with three solo tackles…Recorded career-high three PBUs in win against Blue Devils…Started and finished with five tackles (two solo) and 0.5 TFLs in win at Florida State (Oct. 7)…Posted two tackles (one solo) in start vs. Georgia Tech (Oct. 14)…Started and finished with two solo tackles and one PBU in win over Syracuse (Oct. 21)…Started and had two tackles and one PBU in win at North Carolina (Oct. 28)…Tied career high with seven tackles (five solo) in start against Virginia Tech (Nov. 4)…Recorded second interception of season and added two tackles and one PBU in win over Notre Dame (Nov. 11)…Finished with four solo tackles in win over Virginia (Nov. 28)…Started and had five tackles (two solo) at Pittsburgh (Nov. 24)…Started ACC Championship Game against Clemson (Dec. 2) and finished with three tackles…Saw action in Capital One Orange Bowl against Wisconsin (Dec. 30).